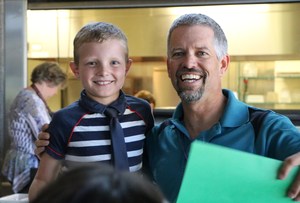 The inaugural Bravo! Junior award was awarded to Anderson Frazier, a 3rd grade student at Riverview Elementary. Anderson was nominated by Megan Krischke whose children also attend Riverview. She nominated Anderson for his kind and encouraging action.
Megan had been experiencing car troubles and had to drive a car that she disliked being seen in and described as "an old grandma car." When she arrived at Riverview, Anderson asked her if it was her car and immediately told her how much he liked it, and asked if it was the same car she had driven him in previously. Megan told him that no, that car had died the day before. “Oh no! That’s too bad,” he said.
In her nomination Megan wrote, “It was a small thing, but I immediately got in the car to call the boy’s mom to tell her how sweet he had been. In other interactions with Anderson at school, I've been impressed that he remembers me and will take the time to say ‘hi’ to a friend of his mother's.”
Nice job, Anderson!
As a Bravo! Junior award recipient, Anderson was entered to win a $25 gift certificate to Maria's Bookshop.
Print